Fans are invited to watch the team’s workouts on the practice fields at the complex each day.

There is no charge to attend and free parking is available.

Workouts at Cool Today Park are free and open to the public up to the date that exhibition games begin.

The most recent major league baseball team to make the suncoast its spring training home is the Atlanta Braves with its new 30 year lease. The Brave's move to the suncoast comes after 22 - 23 years at Disney's ESPN Wide World of Sports Complex near Orlando, Florida.

Their first full spring training season took place in 2020 at the new CoolToday Park, a 6,200 seat ballpark that can accommodate up to 8,000. The new park did, however, play host to the Tampa Bay Rays on March 24, 2019, the Brave's first and only spring training game there at the end of the 2019 season.The Braves beat the Rays 4 - 2 in that game, just for the record! 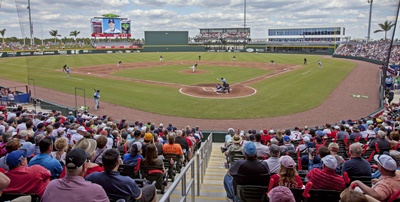 The Braves, who have spent over 72 consecutive years playing in Florida, will be training in the new $140 million ballpark, owned by Sarasota County, which comes complete not only with plenty of seating but also a left-field Tomahawk Tiki Bar for food and libations.

How did the new Atlanta Braves spring training site become known as CoolToday Park? Well, in December, 2018, the city of North Port announced a 20-year stadium naming-rights deal with CoolToday, a local air conditioning, heating, plumbing and electrical services company. As of this writing I’ve not been able to uncover how much CoolToday paid for the 20 year deal. Terms of the deal were not disclosed when the deal was signed.

The 90 acre site also sports 7 fields, including practice fields and multi-use fields that can feature other events outside of spring training season, so it's more than just a spring training baseball complex.

In the off season the JumboTron plays host to popular movies for fans. And CoolToday Park also hosts holiday festivals such as Jingle Jam, which they are wanting to turn into an annual event, and its own Farmer's Market from 8 a.m. to noon on Wednesdays from October through March, so you might say it's much more than just a ballpark! 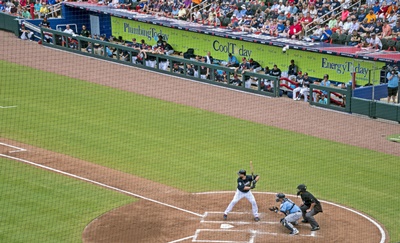 For the baseball fan it seems like designers thought of everything from drink rails so you can stop and watch the game from almost any vantage point and set down your drink, 1,800 berm seats to a right field patio and a left fiel lounge for group seating and a specialty menu.

The latest trends in ballparks: The CoolToday Park features a number of familiar facets of other Grapefruit League facilities such as the clubhouse behind the right field fence, which is reminiscent of Charlotte Sports Park. An outfield grandstand is similar to Bradenton’s LECOM Park, home of he Pittsburgh Pirates for spring training. The ballpark also has a left-field tiki bar, as does the Phillies’ Spectrum Field in Clearwater, Florida. The outfield dimensions of CoolToday Park are very close to those of SunTrust Park, the Braves’ back in the Atlanta. 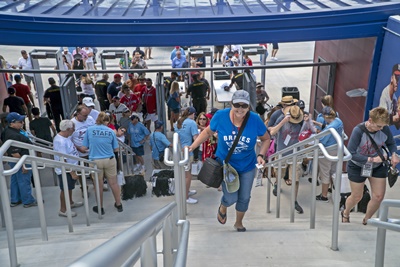 If may be confusing because both North Port and Venice, Florida are named as the Atlanta Braves spring training home but the official address of CoolToday Park is 18800 South, W Villages Pkwy, Venice, FL