Sarasota's Ed Smith Stadium, the new home of the Orioles starting in 2010, has undergone a significant "face lift" and refurbishment. The stadium looks brand new.

McKechnie Field, now known as LECOM Park, in Bradenton has been home to the Pittsburgh Pirate Spring Training games since 1969 and the Pirates work outs take place nearby at their spring training facility called "Pirate City."

If you're willing to drive south about a half-hour from the Sarasota-Venice, Florida area you'll be able to watch the 2008 American League Champion Tampa Bay Rays work out in Port Charlotte at Charlotte Sports Park, also newly refurbished within the past several years. 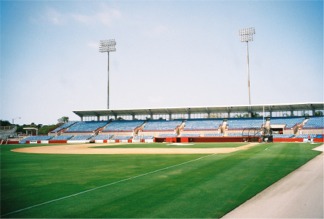 Spring training starts in mid February as the ball players first begin to arrive. Baseball spring training is an exciting time of year, holding new hopes and promises for a winning season and perhaps even a world championship in “far off” October.

Recent past history: After a year or two of the City of Sarasota and Sarasota County talking deals with the Cincinnati Reds and the Boston Red Sox, all of which fell through, the O's became the "new" spring training tradition in Sarasota. 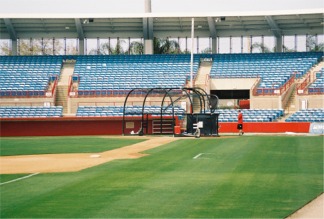 The Orioles Spring Training workouts are free and open to the public. The work outs take place on the diamonds behind Ed Smith Stadium and start around 9:30 a.m. and it's a great way to see your favorite players get in shape for the new season.

The Pittsburgh Pirates Spring Training grounds are located in nearby Bradenton, Florida, a short drive from Sarasota's Ed Smith Stadium.

The Pittsburgh Pirates Spring Training workouts are free and open to the public. The Pirates start around 10 a.m. Pirate City is located at 1701 27th Street East, Bradenton.

Teams that have held the annual rite of Baseball Spring Training in Sarasota:

Together, the Sarasota and Bradenton areas have seen some of the biggest names in baseball history take part in spring training through the decades since 1924.

The Baltimore Orioles Spring Training Camp arrived in Sarasota in 2010. With a 30 year lease on Ed Smith Stadium, the Orioles are no longer the vagabonds of the Grapefruit League as they make their new home in a welcoming Sarasota.

Spring training gets underway around mid February on the outer fields of Ed Smith Stadium at the City of Sarasota Sports Complex. Click here for more on Baltimore Orioles Spring Training.

The Baltimore Orioles first ever Fan Fest for their new spring training home in Sarasota, Florida took place in the Fall of 2009. The day was filled with bright Florida sunshine, warm smiles and greetings and prizes for the fans from the Baltimore Orioles Baseball Organization. Click here to read about and see pictures of the festivities.

The Tampa Bay Rays will not be traveling to Port Charlotte for the 2023 spring training season due to significant damage to the stadium by Hurricane Ian in late September 2022. The Rays will hold the first phase of their Major League Spring Training camp at Disney’s ESPN Wide World of Sports Complex before hosting most of their Grapefruit League games at Tropicana Field in St. Pete. (Previous to 2023, Port Charlotte, Florida is the baseball spring training site for the 2008 American League Champion Tampa Bay Rays. The inaugural Rays spring training season in 2009 found The Charlotte County Sports Park newly renovated to welcome the Tampa Bay Rays. With a capacity of 7,000 and within an hour’s drive from the Sarasota/Venice, Florida area, click here for more on the Tampa Bay Rays Spring Training Season.

A Tribute to the Cincinnati Reds Spring Training Years in Sarasota: 1997 - 2009

The Cincinnati Reds came to Sarasota for baseball spring training, Florida Style, for 12 years! Ed Smith Stadium and its outer practice fields were the off-season home to the Big Red Machine and every year around mid February the hometown fans would show up to watch the players get in shape for another baseball season. The Reds moved to Goodyear, Arizona in 2010. Here's more about the Cincinnati Reds Baseball Spring Training Sites in Sarasota.

While Ed Smith Stadium and its outlying diamonds were the “official” Cincinnati Reds Spring Training Site through 2009, there was another place where the Reds were welcomed with open arms, the "Reds Rally." This was an annual event, until 2007, for the "Big Red Machine" which fired everyone up for the start of another spring training season. It took place in downtown Sarasota and it was absolutely free! See photos and read more about the 2007 Cincinnati Reds Rally. It's my tribute to the years that the Reds called Sarasota their spring training home!