Full squad workouts begin at approximately 9:30 a.m. and will last until approximately 12:30 p.m. until games begin. (Always subject to change by the ball club).

The 2023 season will mark the Orioles’ 14th consecutive Spring Training season in Sarasota and the club’s 12th at renovated Ed Smith Stadium.

The Orioles announced their 2023 Grapefruit League schedule, which is slated to begin Saturday, February 25, at Ed Smith Stadium in Sarasota, Fla. against the Minnesota Twins. The club’s 2023 spring schedule features 17 home games, including eight weekend games. (More on the schedule below)

Fans are invited to watch the team’s workouts on the back fields at the complex each day.

There is no charge to attend, and free parking is available.

During every Saturday and Sunday home game, the Orioles will honor members of the Sarasota community who are selflessly working or volunteering to improve the lives of others through the Birdland Community Heroes program

Workouts at Ed Smith Stadium are free and open to the public up to the date exhibition games begin.

Ballpark gates open at 9:00 a.m. each day at the Ed Smith Stadium/City of Sarasota Sports Complex.

Baltimore Orioles Spring Training Tickets and the schedule of exhibition games are below.

The Orioles announced their 2023 Grapefruit League schedule, which is slated to begin Saturday, February 25, at Ed Smith Stadium in Sarasota, Fla. against the Minnesota Twins. The club’s 2023 spring schedule features 17 home games, including eight weekend games.

The O’s will play a spring-high six games against the Pittsburgh Pirates, three of which will be at Ed Smith Stadium. The Orioles will also host the Atlanta Braves, Detroit Tigers, Philadelphia Phillies, and Twins during their 2023 Spring Training slate.

The team’s 15-game road schedule features three games at the home ballpark of the Pirates, and two games at the Blue Jays, Phillies, Tigers, and Twins. The Orioles will also play one game at the Braves, Rays, Red Sox, and Yankees.

Late addtion: The Orioles also announced that the club will host the St. Louis Cardinals at Ed Smith Stadium for an additional Spring Training game on Monday, March 27, 2023.

Below Are Game tickets we were able to source.

In the 14 years since the Orioles moved Major League Spring Training to Sarasota, more than 988,000 fans have enjoyed Orioles games at Ed Smith Stadium.

The Orioles franchise history dates back to 1901 and to Baltimore to 1954. Now, the Orioles' new era of spring training in Sarasota makes the O's Sarasota's spring training team until 2040 under a 30 year lease. 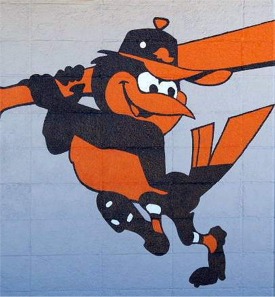 Baltimore Orioles scheduled workouts take place at the outer practice fields of Ed Smith Stadium and start around 9 a.m. and are free and open to the public at 12th Street and Tuttle Avenue.

Make your plans now to come out to Ed Smith Stadium and see this year's crop of new prospects along with returning Baltimore Orioles and veteran players as well.

Take in a few games as well at 12th Street and Tuttle and get your Baltimore Orioles Spring Training tickets early before they sell out.

There's nothing like watching the "old spring training ballgame" while being able to work on your tan at the same time. Ah, Florida Spring Training! 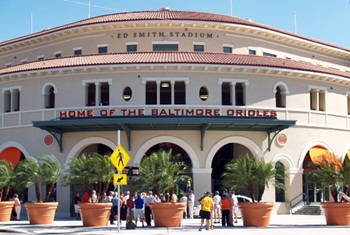 All information in the Oriole's Spring Training Schedule is deemed to be correct, however it was provided by the Orioles office and is subject to change, without notice, due to error and/or changes according to the Orioles.