What about Hurricanes and Sarasota?

The time of year to keep an eye and ear on
the weather reports..

Hurricanes begin to rev up in the Atlantic Ocean, Caribbean Sea and Gulf of Mexico from June 1 to November 30 with the peak of the season around the first week of September.

This is a result of tropical waves (weather disturbances) moving off the west coast of Africa and then out over the warm waters of the Atlantic where the wave may further develop and become organized into a tropical depression, then a tropical storm and perhaps even a hurricane.

Though forecasters try to predict and scare everyone half to death with their prognostications as far as 6 months in advance, no one really knows how to predict what the outcome of the season will be until it’s over.

In 2004 and 2005 the Atlantic Basin produced more storms than normal. This took all the forecasters by surprise, as did the sudden development in mid-September, 2007 of Hurricane Humberto, off the Texas Gulf Coast.

In just about 18 hours’ time a depression off the Texas Gulf coast that no one was really paying much attention to, because they didn’t think there was a possibility of “further development,” became a Category 1 storm. Humberto “came out of no where,” according to the surprised forecasters. 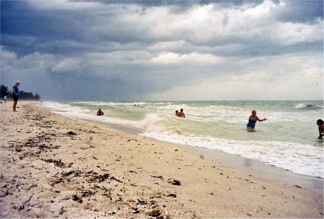 In 2006 forecasters predicted another “bad” year for coastal residents and not one 'cane made landfall on the continental U.S. The same kind of dire predictions were forecast for 2007, but thus far the season hasn’t lived up to those predictions.

The storm forecasters, with all their millions of dollars worth of computers and electronic gizmos, satellites, balloons and divining rods try to predict, 6 months in advance, how bad the next year’s season will be, yet Humberto in September 2007, off the Texas Gulf Coast, came as a complete surprise to them. How can this be?

From what I’ve seen, predictions so far in advance are “iffy” at best, especially when forecasters can’t spot one that’s right under their nose!

I guess the moral of all this is that if you’re afraid to come to Sarasota in the summer because of the potential for these storms, you’re handing too much self power over to weather forecasters, who have a spotty record of predicting the future!

If you'd like to check the latest storm forecasts and tracking, click on this link, which will open a new browser window (so make sure your pop-up blocker is turned off) National Weather Service. 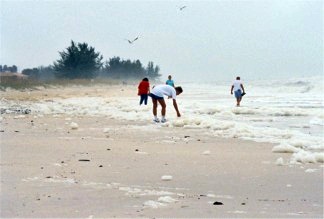 The ocean, white with foam, after Hurricane Frances, September 2004

If you want to come and vacation in the Sarasota, Florida area over summer and are worried about storm season, you might consider buying trip insurance, just in case. But, if you love summer, as I do, there’s no better place to be than here on the Sarasota Gulf Coast; hurricanes or not. The Sarasota area is truly a glorious and sun blessed place to spend your summer vacation, or at least part of it.


The "Mean Season," as it has been called, ends each year on November 30 as the ocean temperature has been cooling over the past couple of months as the northern hemisphere makes its annual winter-time trek around the sun. The weather now becomes milder and for those who dread the high heat season, it’s now their time to come out and play!

Sarasota County recorded a hurricane's direct hit in 1944 when the eye of a Category 3 storm moved through north Casey Key and Osprey.

There are some theories and local superstitions as to why the city of Sarasota has not had a direct hit from a storm since record keeping began back in 1871; the wildest one has to do with American Indian Spirits that still protect the area. These are what are known as “Urban Legends.”

Others say that the Sarasota area is safe due to Mother Nature’s placement of the sand dunes on the coastal beaches, or the magic powers of Siesta Key’s white sand beaches and underwater crystals.

Whatever reason people believe, we have stayed safe from these potentially monster storms along the Sarasota Sun Coast for quite a number of years.

The record books say that Sarasota did take on varying degrees of damage from hurricanes in 1926, 1944 and 1950.

So the best thing to do if you’re coming to town during storm season, which peaks in early September, is to keep your eyes and ears open for weather news and go on with your fun in the Sarasota sun!

From Hurricanes to Sarasota Florida Weather