Sarasota Florida Kite Boarding
Where to Ride the Wind and the Waves!

Kite boarding, or kite surfing as it is also known, along one of Sarasota, Florida's beaches is one of those fun, "extreme sports" that has grown in popularity in recent years, not just around the sun coast, but worldwide to around 1.5 million enthusiasts.

And you can see why.

What better way is there to catch the wind and catch a wave all at the same time and cut across the water with the greatest of ease while sailing along in the wind?

And you're not in a boat!

You are right there on the water and in the wind!

Just watching the kite boarders as a  spectator from on the beach is exciting. Imagine what it is to actually be doing it! 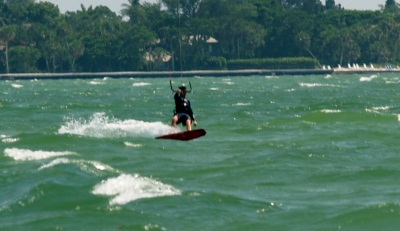 (By the way: you’ll also find information here on the rules and etiquette to observe when you are off Sarasota area beaches and on waterways so that you have not only an exhilarating and fun experience but one that’s safe for you as well as those nearby on the beach or in the water.)

On a windy sun coast day you can find the kite boarding enthusiasts up and down the coast from the southwest side of Tampa Bay in the waters off St. Pete, around the Sunshine Skyway Bridge, up and down Sarasota bay, all the way south to Venice Beach and all along the shores of the Gulf of Mexico.

It does need to be a windy day, though.

And we do get our share of windy days here. But there can also be lengthy periods of no wind, or so I am told! 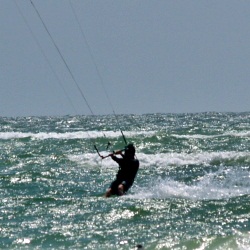 Typically they say the wind dies down here in the summer around the sun coast, but the pictures on this page were taken in mid August.

And that’s about as “summer” as you can get here in Sarasota! So there was no problem with picking up some good wind then.

There usually is a sea breeze, too, so it can be very windy on the water but not so much so inland.

There is also enough potential for windy conditions due to the summer being storm season and with it the potential for tropical depressions, storms and hurricanes; although I don’t advise kite surfing in any kind of stormy weather, tropical storm or hurricane!

And Florida is the lightning capital of the world; so always take potential weather changes into account in your preparations.

If you’re big time into this extreme sport, on a windy day, you’ll find yourself among enthusiasts off almost any Sarasota or suncoast area beach or even Sarasota bay.

From Turtle Beach to Anna Maria Island, Siesta Key to Manasota Key, anywhere there’s a combination of wind and water you’ve got a beautiful spot to ride the wind and glide along the water; jumping the waves, flying through the air, sharp turns, winding turns, leaping through the wind; all in a days’ play of kite surfing along the suncoast.

One of the hot spots, as far as beaches along the Sarasota area coast, is just off of south Lido Key Beach near the channel known as Big Pass.

Big Pass is the body of water between North Siesta Key and South Lido Key that leads from Sarasota bay to the Gulf of Mexico. 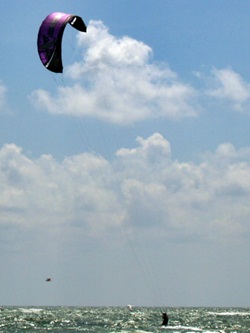 Here winds can be high at certain times of the year.

Also take note: here at Big Pass and south Lido Key it’s posted that currents are fast and strong; it can be dangerous to anyone let alone the new or less than experienced enthusiast.

(In fact, if you would really like to try this extreme sport for the first time, let me advise you, strongly, to first take lessons from a professional.

That way you’ll know what you’re doing, you’ll be safe and you’ll keep others nearby on beaches and in the water safe.

There are also some guidelines and rules to follow. See more below).

But, if there’s some good wind you can be wave hopping, air jumping or cutting the chop, doing your tricks and having the time of your life.

To watch kite boarding and boarders doing their “extreme thing” from shore it looks like a real “rush!” 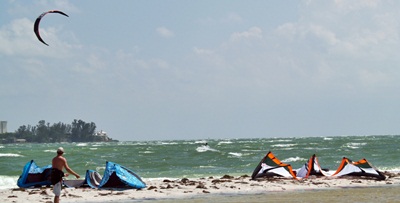 Let me reiterate: If you’re a beginning kite boarder you want to take lessons to learn kite-surfing from someone who is a professional and experienced.

And as a newbie, no matter your age, you’ll most likely want to stick to the calmer parts of Sarasota bay or other inlets where the water and current is kinder, clearer and shallower and where you’re away from other water sports enthusiasts.

You can find a professional kiteboard instructor for how to learn kite surfing by visiting any local outfitter or extreme sports shop, "sun and ski" shop or "surf and sun" type shop near the water or in town all around the sun coast.

Remember, too, that there are restricted areas of waterways and beaches where you may not go kite boarding so as to not interfere with swimmers, boaters, kayakers and beach goers.

To help you out some more, click this link for some general guidelines and rules of etiquette around Sarasota and sun coast area waters.

If, however, you are experienced and there’s some great wind blowing offshore, jump to it and have a great time. 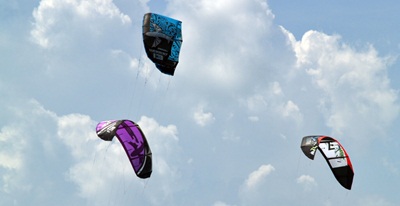 Go ride like the wind and catch a wave. Happy kite boarding!

From Sarasota Florida Kite Boarding back to Sarasota Activities.