It is not only both fun and picturesque but also quaint. It looks like a throw back in time to the “good old days” of “old Florida!”

While this Pier looks “Old Florida,” you should know that it was renovated to the tune of over $2 million after the 2004 Hurricane season due to structural damage caused by Hurricane Frances.

The Grande Re-opening Ceremony for this historic site took place on September 21, 2007.

You should also know that the descriptions: Historic Bridge Street Pier and Historic Bradenton Beach City Pier are both used interchangeably to describe this locale. 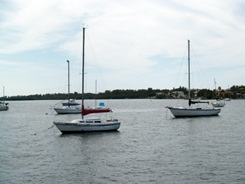 With boats of every kind anchored in the harbor and plenty of spots along the Bradenton Beach City Pier to drop a line, this place is a feast for the senses, and, for catching fish.

Situated on the far northern edge of Sarasota Bay and on south Anna Maria Island, Florida this Historic Pier is also just south of the Cortez Road (S.R. 684) drawbridge that spans Bradenton to Anna Maria Island. 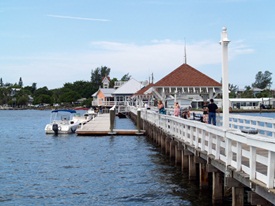 A scenic place to fish with a great view of northern Sarasota Bay, other features of the Bradenton City Pier include Rotten Ralph's (a dining spot), a bathhouse and restrooms, bait and tackle shop, a Harbor Master’s Office and a 300 foot dock.

At the end of the Historic Bridge Street Pier stands a Pavilion, offering a shady spot from which to drop a line on a hot Florida day. 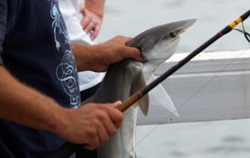 What might you catch here? Anything from the Bonnet Head Shark in the photo to whatever might happen by: Snook, Redfish, Jack, Snapper, King Fish, Cobia, Grouper, Mullet, Bluefish, Sheepshead Ladyfish, Flounder, etc.

For Anna Maria Island Fishing, this seems to be a good spot and not overly crowded. The times I was recently there, for purposes other than fishing, there were few fishermen crowding the pier, giving you a lot of room to move. 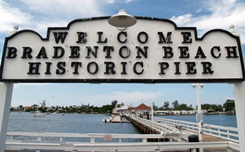 Directions: Coming from downtown Sarasota, go over the Ringling Bridge on to St. Armand’s Key. Follow it north onto Rt. 789, up over the bridge onto Longboat Key. Take Gulf of Mexico Drive on Longboat Key all the way to Anna Maria Island. Once you’re on Anna Maria Island simply travel north to the town of Bradenton Beach (just north of Coquina Beach) and turn right on to Bridge Street (at the roundabout). At the end of Bridge Street lies parking and the Historic Bradenton Beach City Pier.

Caught a whopper? Or just have a whopper of a fishing story to tell? Where's your favorite Sarasota area fishing hole? What were they biting on when you caught that trophy fish? Let others know about your best fishing story or fishing recommendations. Click here to share your Sarasota fishing adventure!

Another thing here is that at the end of this 350 foot fishing pier that stretches into southwest Tampa Bay there is a 2 story restaurant called The Rod and Reel Pier Restaurant (bar and grill) that is fantastic. I have had their blackened Grouper and it was excellent. Who knows, they may have caught it fresh right out the window of the kitchen!

Anna Maria Island fishing here is both picturesque and fun and there is a bait shop right on the deck at the Rod and Reel Pier.

Being that this is southwest Tampa Bay, there’s a lot to catch here on your Anna Maria Island Fishing adventure. What might you angle for here? Tarpon, Snook or Flounder, Redfish, Cobia, Kingfish, Barracuda, Ladyfish, Sheepshead, Grouper and a variety of sharks including a Hammerhead caught back in 1979 that set the world record for largest shark caught off a pier. So, how’s that??!!

Another bonus: Look to the northeast and off in the not too distant view is the Sunshine Skyway Bridge.

Directions from Sarasota to the Rod and Reel Pier: Take Rt 41 North to Bradenton to head west on Manatee Ave W (Rt 64) across Palm Sola Bay, across Perico Island and onto Anna Maria Island -- Turn right at Gulf Dr N -- Slight left to stay on Gulf Dr N -- Turn right at Pine Ave --Turn left at N Bay Blvd -- Turn right at Hibiscus Rd/North Shore Dr -- It's a little tricky but you'll find it. Watch for it on the right side out over the water. There’s also a parking lot on site.

Located on the northeast side of Anna Maria Island, the City Pier on South Bay Boulevard stretches some 700 plus feet into southern Tampa Bay and is located just a short drive south of the Rod and Reel Pier (Described above).

This is another fun place to cast or drop your line with the hopes of reeling in “the big one” during your Anna Maria Island Fishing excursion!

This pier dates back to 1910. There's a bait shop and there’s a restaurant at the end of this pier as well; it’s called “The City Pier Restaurant” and it opened in 1995.

What’s to catch here? Much of the same as already described above; a wide array of saltwater fish including: Cobia, Tarpon, Redfish, Ladyfish, Snook, Snapper, Flounder, Grouper, and even a variety of Sharks, Barracuda and more. Perhaps you’ll even spy a Manatee in the bay!

Directions from Sarasota to the City Pier: Take Rt. 41 North to Bradenton to head west on Manatee Ave W (Rt. 64) across Palm Sola Bay, across Perico Island and onto Anna Maria Island -- Turn right at Gulf Dr N -- Slight left to stay on Gulf Dr N -- Turn right at Pine Ave – Follow Pine Avenue to the end and you’ll be right in front of the Historic City Pier.

Longboat Pass Bridge - South end of Anna Maria Island. This is the bridge that connects Bradenton Beach to the north end of Longboat Key.

Have a great time on the water or from the shore. And be sure to let us know, through the link above, about your big catch!