Look Beneath the Sea and Discover the
Creatures of the Deep!

Mote Aquarium in Sarasota offers you the chance to see, first hand, unique sea life and not only that but the chance, also, to make your experience one of learning and fun. One visit and you'll see why it is one of our most popular Sarasota attractions.

Here at Mote you can get up close to numerous creatures of the sea, including sea turtles, jelly fish, manatees, dolphins and sharks.

Plus you can spy in on some tiny creatures of the sea like sea horses and jelly fish.

From my observations from the number of times I've been on an excursion to Mote Marine Aquarium, the sharks seem to be the favorites of many who visit here.

In fact there’s a 135,000 gallon shark habitat that allows you a close up view of sharks. It's called "The Shark Zone!"

You can watch from above, looking down into the pool, which is really a cool vantage point.

There’s also a sting ray "petting pool" on the grounds that is home to numerous species. It's located out in the court yard under a thatched roof Tiki Hut.

You’ll find many varieties and species of fish and other marine life at Mote Aquarium; everything from eels, to puffer fish, lion fish and many more.

There are both fun and educational opportunities around every turn at Mote Aquarium. It's kind of like being on a field trip away from school.

There’s also a special interactive exhibit called, “Shark Tracker,” where you can follow the scientists who follow the sharks and learn how sharks hunt for food and survive in the deep.

And there's "Contact Cove," a sort of sealife "petting zoo." 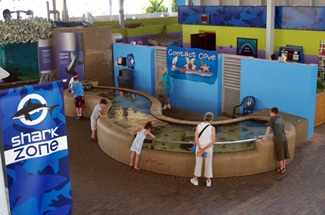 Also on display is a preserved 25-foot giant squid, one of only 2 in the U.S. 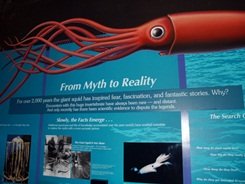 Mote Marine Aquarium also operates a dolphin and whale hospital. There are occasional stories in the news when the aquarium staff is treating a sick or injured dolphin, whale or turtle.

Additionally, Mote Aquarium features “The Immersion Cinema,” where you can participate in “The Dolphin Bay Project:” the search for a missing dolphin and her calf, in a state of the art theater that features a 40-foot HDTV.

Another feature in “The Immersion Cinema” is “Predator/Prey,” which I have participated in.

It’s an interactive game with a touch screen pad for you to manipulate and you work your way through the marine life food chain. 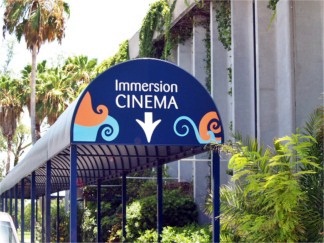 Unfortunately, I got hammered...er, I mean, eaten by a shark! (I’m not very good at video games but you and your kids will love it!)

Mote Aquarium is one of those rare places where you can get a glimpse of the laboratories too, so you can watch marine science and biology taking place right before your eyes, where they uncover the secrets of the deep. 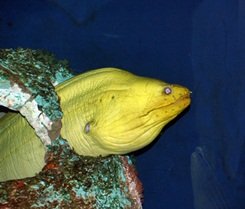 And if you want to learn more about marine biology or if you just want a memento from your day here they have a gift shop where you can select from, among other things, books on sea life and marine biology for every age and learning level, for that budding oceanographer or marine biologist in the family, as well as other unique treasures.

I wouldn't normally give a "plug" to a "gift shop" but this one is special because by making a purchase in the gift shop you are helping to fund additional Mote scientific research. And that's important to all of us. 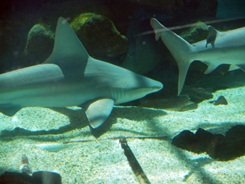 If you are “into” ecology (and, who shouldn't be?), the ocean and sea life, Mote Marine Aquarium is the place for you, because this is the place you can most likely get answers to some of your questions.

Research is at the heart of the staff of Mote Marine Aquarium.

Mote Researchers are working on projects around the world in an effort to help understand the impact we humans have on the fragile marine ecosystem.

In fact Mote Marine Laboratory has been working since 1970 in cooperation with the Chicago Zoological Society on the longest running Dolphin research program in history.

Known as the Sarasota Dolphin Research Program, 5 generations of about 150 Dolphins have been found and documented to be year round residents of Sarasota Bay.

Mote Marine Aquarium is a definite “must see” on your stay in the Sarasota area. Make sure you block out time to enjoy the interactive feature at the state of the art “The Immersion Theater,” too.

And if you get hungry while on your excursion they have a retro style restaurant on the grounds called the "Deep Sea Diner." 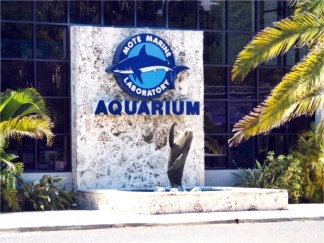 Directions: From downtown Sarasota cross the Ringling Bridge to St. Armand’s Circle, bear to the right, then north toward Longboat Key, watch for the signs and turn right at Ken Thompson Parkway, before the bridge to Longboat Key. Mote Aquarium will be on the right side. There's free parking in the lot.

From Mote Aquarium to the Sarasota Attractions