Pitchers & Catchers First Work Out
TBA by The Pirates

Full Squad First Work Out
TBA by The Pirates

Pittsburgh Pirates Spring Training Tickets and the schedule of exhibition games are below. 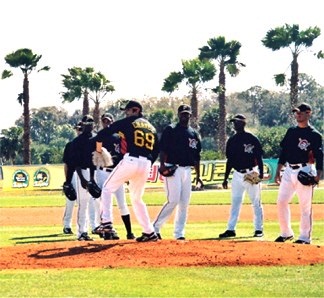 The Pirates working out at Pirate City.

Below Are Game tickets we were able to source.

The Pittsburgh Pirates spring workouts take place at Pirate City and start around 9 a.m. and are free and open to the public.

On February 13, 2018 Manatee County honored the milestone 50th anniversary of Pirates Spring Training in Manatee County. A proclamation was issued at the Board of County Commissioners Meeting recognizing the partnership between the Pirates and the local communities.

The Pirates are scheduled to play a total of 32 games, 16 of which will be at home at LECOM Park in Bradenton, Florida.

2023 will mark the 55th season in which the Pirates have held spring training in Bradenton. The 2023 season is also the 100th year of baseball being played in Bradenton, as the St. Louis Cardinals began play there in 1923.

Opening Day of the Pirates Grapefruit League season will be on Saturday, February 25, as the team hosts the Toronto Blue Jays. Three of Pittsburgh’s first four games will take place at LECOM Park. The team’s only road game during the first four contests will take place on March 1 at Lakeland against the Detroit Tigers.

Additional highlights of the 2023 Spring Training schedule include:

MLB tickets to see the Pittsburgh Pirates play their spring training games at McKechnie Field, now LECOM Park, have been available for decades.

Before the Pirates made Bradenton their spring training Mecca in 1969, they called many other locations their spring home; Havana, Cuba, and Hollywood, California being among them.

Make your plans to come out and see this year's crop of new prospects along with returning Pittsburgh Pirates as well as veterans.

There's nothing like watching spring training exhibition games while being able to work on your tan. Ah, Florida Spring Training!!

Directions: To get to Pirate City From South (Sarasota): Travel North on US 301. Cross S.R. 70 and make a right onto 38th Ave. East. Make first left onto 27th St. E. and Pirate City is a mile up the road.

From Interstate 75: Exit I-75 at S.R. 64 West (exit 220 if traveling south, exit 220B if traveling north). Proceed west towards Bradenton and make a left on 27th Street East. Pirate City is approx. a mile on the left.

To get to McKechnie Field, now known as LECOM Park, From South (Sarasota): Take Route 41 North to Cortez Road, go straight onto Business 41 and turn right onto 17th Ave. West. Ballpark is located at intersection of 17th Avenue West and 9th Street West.

Game times are PM and local. All information in the Pittsburgh Pirates Spring Training Schedule is deemed to be correct, however it was provided by the Pirate's office and is subject to change, without notice, due to error and/or changes according to the Pirates.