Sea World Orlando Florida is much
more than fish!

Sea World Orlando Florida is one of the region's top attractions. The park is large and there’s much walking to do if you’re going to see everything.

But there is help available because you can pick up a map of the park at the entrance gate when you buy your tickets.

This fold-up map is something to keep handy throughout your adventure-filled day at Sea World Orlando Florida.

It will point you in the right direction to make sure you get to all the exhibits you want to see and provide the times of the shows on the back of the map.

The map also points out convenience stops such as restrooms, smoking areas, a picnic area and even a pet care center. Your Orlando Sea World map will come in handy and make a nice memento to keep.

The really big star of Sea World Orlando is Shamu, a trained killer whale, also known as an Orca. Shamu performs six 30 minute shows at Shamu Stadium throughout the day and early evening, including a night show at 9:15 p.m. when the park is open until 10 p.m. The first show of the day starts about 11 a.m. and the seats are usually filled.

The kids and adults all seem to love Shamu and he does seem to perform some incredible feats. How you train anything that huge is amazing to me! The Shamu Adventure, as it is called, is a definite "must see" and it’s included with the cost of admission into Sea World Orlando Florida.

But be forewarned that Shamu likes to splash – on purpose! If you sit in the first dozen or two dozen rows of Shamu Stadium, you will get wet, probably soaked! Some audience members bring along rain slickers just hoping to get splashed by Shamu! I just don’t understand some people! 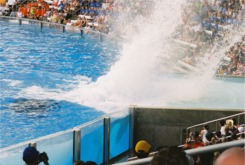 There is also the Clyde & Seamore Show at the Sea Lion and Otter Stadium, with top billing going to a couple of real “hams” er, I mean, a seal and a walrus, who work for fish instead of peanuts and when we were last there were participating in somewhat of a Pirate Island sort of skit. Clyde and Seamore perform 7 shows a day, starting about 10 a.m.


There’s also a huge sea lion island habitat for which you can purchase tasty fish treats to toss to the seals and watch them swim and dive for the treats through the water or just lie around. 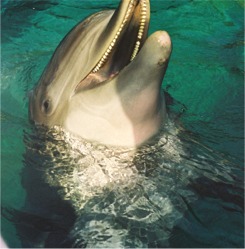 Stingray Lagoon is where you can pet real live sting rays, but the most popular ‘petting pool’ is “Dolphin Cove,” where the dolphins will swim right over to the edge of the pool.

There you can pet, get close to and take pictures of real live dolphins!

This is really an awesome experience.

And the trainers around the Dolphin Cove pool will coach visitors on how to attract the dolphins to the side of the pool (no, it doesn’t involve tapping or patting the top of the water!). This may be about as "up close and personal" of an encounter with a dolphin that most folks will ever have.

Other popular attractions at Sea World Orlando Florida include; “Shark Encounter,” where you’ll meet sharks, moray eels and barracudas, The “Manatee Rescue” and “Penguin Encounter,” just to name a few.

At Sea World Orlando Florida you can also visit the stables and walk through the barn where the Anheuser Busch beer-wagon-pulling Clydesdale horse team is quartered. They call it “Clydesdale Hamlet!” And the horses are huge. 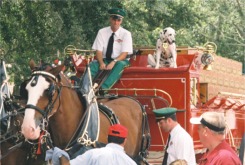 This was a great place for us to stop for lunch and get a couple of free beers! (The free beer has since been discontinued when the sale of the park to new owners took place.)

When I stepped into line at the deli to select items for my lunch tray I looked at the prices on the menu and thought, “Oh boy, a little high!” But, it didn’t turn out to be the case when I received the food I ordered. Talk about generous size deli sandwiches and side dishes, all prepared fresh that day and delicious!

No complaints from me for that kind of quality, value and a couple free beverages! In fact the lunch was so good and filling that we didn’t have to eat another bite the rest of the day and we didn’t leave Sea World Orlando Florida until well after 5 p.m.

(Editor's note: Anheuser-Busch, former owner of Sea World, was bought out by In Bev, Europe's largest brewer, in 2008. The practice of offering complimentary samples of Anheuser-Busch beer has been ended.) 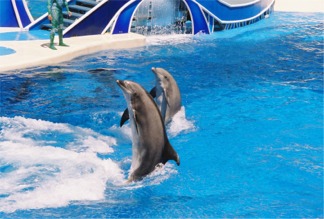 All in all, the waits in line were not what we considered long and the lines moved pretty fast due to good crowd flow. We were at Sea World Orlando Florida in the steamy month of July and didn’t find it too unbearable until late in the afternoon when the sun really starts beating down. 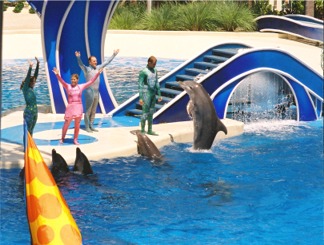 But there’s enough shelter, shade, rest stops, rest rooms and at least a dozen restaurants and refreshment stands, so if you do get overcome by the heat in the summer months, there’s someplace nearby inside the park to stop and recharge yourself or freshen up.

The parking lots and park were full and we found the park quite comfortable, roomy and clean, with enough places to pick up a drink, snack or a full meal.

It was a magical day spent among Shamu, the dolphins, penguins, sea lions, sharks and many more of the underwater world with whom you can have an up close and personal encounter.

And as a bonus we found the Clydesdales and the hospitality center and deli to be an extra treat. It was all a very nice touch to make a very nice day.

The park is impeccably clean and maintained with outstanding attractions, shows, exhibits, entertainment and animals, restaurants, diners, a deli and restroom facilities.


Whales, Sharks, Penguins, Sea Lions, Manatees, Dolphins and more can all be enjoyed at Sea World Orlando Florida, only 120 miles and just under a 2 hour drive from the Sarasota area and our gulf beaches.

Tips to help you enjoy your day at
Sea World Orlando Florida
: