While American Alligators, which are native only to the Southeast U.S, are present in all waters of Myakka River State Park year round, the best time to see them is in early spring; late March – April as the gators look at their calendars and find that it’s annual mating season.

So you’re likely to see a lot more activity at this time of year, than, say in the hotter summer months as the reptilian creatures dislike high temperatures about as much as humans.

Because while humans may go indoors to take advantage of the cool a/c the gators go under water to stay cool.

From my past experiences I can tell you that one of the best chances you'll have to see them is if you take the airboat guided tour of the lake.

If they're "out there," the tour guides/park rangers will know where to find them and point them out to you.

And if you take one of the airboat guided tours, you’ll learn about how the female gator makes her nest out of mud, twigs and leaves, near the water and how the temperature at various levels of the alligator nest determines the genders of the hatch-lings.

In effect, what the female builds as a nest is really an incubator in the wild. The females spend much time near the nest protecting it from other predators. 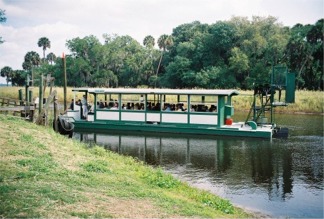 When it gets hot in the summer, these prehistoric creatures tend to lay on the bottom of the lake or river, surfacing rarely, only for air. They can stay under for hours. So it’s a little more difficult, but not impossible, to spot them during the high heat season.

Another thing I learned about gators on the “Gator Gal” airboat tour is that you can find out the full length of an alligator by measuring only its nose (no thanks!). For example if the alligator’s nose is 8 inches long then he/she is a total 8 feet in length from nose to tail!

There’s a mysterious off-the-beaten-path area in Myakka River State Park where alligators like to congregate. Park Rangers and guides say that though their numbers fluctuate greatly, they have counted as many as 120 in one viewing. It’s a place in the park's nature preserve called “Deep Hole” and for a reason researches do not yet understand it attracts the gators like candy.

The “Deep Hole” has been estimated at about 142 feet deep, but no one knows for sure the real depth. Apparently no one wants to go diving, with all those alligators around, to find out the true depth.

Access to the “Deep Hole” is restricted to no more than 30 humans a day and it requires a special permit for boaters and hikers. You can feel safe though, because “Deep Hole” is not someplace you’ll accidentally stumble across in your exploration of Myakka State Park. It’s within a 7,500 acre park area designated as a wilderness preserve.

I’ve never been to “Deep Hole” because the regular guided tour doesn’t go there. But if you’d like to find out more about exploring the mysterious “Deep Hole,” contact the park office for more information at (941) 361-6511.

While these creatures prefer to eat things other than humans you still need to be careful when in their natural environment.

They can be very dangerous and there are posted signs all over Myakka River State Park that make you aware of the fact that you need to demonstrate great caution near water and other places in the park. 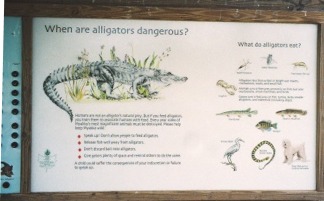 And it’s against state law to feed or to try to interact with gators in any way. So don’t approach, tease, frighten or feed them. It’s dangerous to do so and causes them to lose their fear of people, requiring them to be destroyed.

The American Alligator of the southeast U.S. will eat about anything but they prefer to dine on birds, turtles, fish and other prey found in their environment whether it be amphibian or mammal.

Once a gator grows to adult size any animal in or near the water is a potential target.

Tip: Note of Caution: There is no swimming allowed in the park. While in Myakka River State Park keep your eyes open near water; under bridges, in lagoons and on Myakka River/Lake as gators are present in all waters of the park.