Take A Guided Tour on the
Gator Gal or Myakka Maiden.

One attraction that’s definitely worth its price is the Myakka Park Airboat ride, a scenic one-hour guided tour of the Myakka Lake on one of the two world’s largest airboats; the airboat I was on is called the “Gator Gal.”

The other is the “Myakka Maiden.” The “Gator Gal” is a smooth ride out on the Myakka Lake.

The End of an Era Slips Quietly into History

Two of the main attractions of Myakka River State Park have been retired; the "Gator Gal "and "Myakka Maiden" Airboats.

As of July 31, 2018 the two airboats, on which visitors took guided tours of the lake, were taken out of service. Known both as perhaps the largest and slowest airboats in the world, they have been replaced with pontoon boat tours which began August 1, 2018.

The two legendary airboats had been in service for 36 years and carried generations of naturists, adventurers and sightseers out on the Upper Myakka Lake.

----- We shall leave this original page about the airboats on the web site in memory of, and in tribute to, the Gator Gal and Myakka Maiden and all those many untold thousands who enjoyed them over their life span.

To date, I’ve been on the “Gator Gal” for three guided tours.

Each time there was a different park ranger or tour guide.

Each one had extensive knowledge about the Myakka Lake and River, the ecosystem and even the history of the area and how “aliens” invaded what is now the Myakka River State Park area, decades ago.

Aliens such as foreign species of grasses, animals like Armadillos and even some of the Palm Tree varieties were brought from elsewhere. 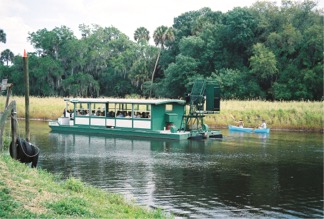 By the way did, did you know that Palm Trees really aren’t trees at all? They aren’t. They’re part of the grass species. So maybe a Palm Tree, in reality, is just a giant blade of grass! It’s amazing what these airboat tour guides impart. Their knowledge of the Myakka River, its creatures and ecosystem would be hard to top.

While the Myakka Park Airboat tour on the “Gator Gal” is just as informative whether or not you see any alligators in their natural habitat, it’s probably more fun to see one or two, especially, while you’re on an airboat named, “The Gator Gal!” But no matter what time of year you find yourself at Myakka River State Park, it is still worth taking the airboat guided tour.

So what about those alligators? Well, the American Alligators of the southeast U.S. are usually more visible in the early spring: late March and early April because it’s mating season and the Florida weather has not yet become hot, when alligators usually spend most of their time under water staying cool. They dislike the high temperatures as much as we humans.


More on The Myakka Park Airboat

The tour guides are entertaining and quick with a quip and also quick to point out a gator here, a turtle there, a rare Blue Heron in the tall grass over yonder. 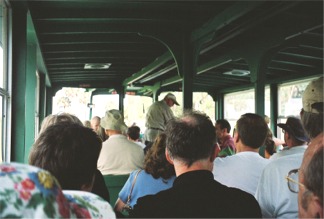 The "Gator Gal" airboat and the "Myakka Maiden" rotate tour schedules and are docked in the Lagoon or “Boat Basin” across from the Myakka Outpost Concession stand. 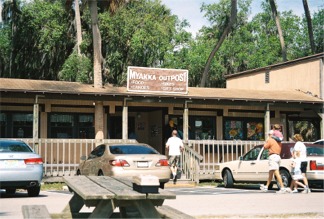 Tips: Traditionally, Tickets for the Myakka Park Airboat guided tour may be purchased on board the boat, but you can claim a seat ahead of time at the boat's pavilion just next to its dock.

Arrive at least 30 minutes before the tour for boarding and if you want to take an 11 a.m. tour, you might show up prior to the 9 a.m. tour to secure a seat for the 11 a.m. trip. During busy season you could have a difficult time getting a seat.

They do not take reservations. It is strictly first come-first serve at this writing time.

Although additional tours may be added during peak season, make sure you secure your seat early. The tour lasts about an hour.

Directions: The main road, Park Road, will lead you straight to the Boat Basin, The Myakka Outpost and the Myakka Park Boat Tours.