The Ringling Circus Museum -
Home of wonder, smiles and child like amazement!

Visiting the Ringling Circus Museum you may recall the words, “Ladies and Gentlemen, Boys and Girls of All Ages….”

Have you ever been to a circus? Perhaps when you were a child; or perhaps you have taken your own children.

If you’ve been to the Circus Big Top and were dazzled, amazed and entertained, so will you be at the Ringling Circus Museum.

There is so much to see that it’s challenging to absorb everything during one visit.

I spent 3 or 4 hours there on a Saturday morning and afternoon and with the amount of written and visual history, displays of past circus pageantry, artifacts, set pieces, music, videos, special films to watch and much more including the world’s largest miniature circus display, I didn’t absorb all of it in that period of time.

The experience and displays are, well, beyond words; except to say that this is a fabulous museum.

The Ringling Circus Museum stretches over 2 buildings; one is a two story building.

But the Museum is much more than the story of just the Ringling Brothers Circus. It encompasses and celebrates the people and history of the circus from its earliest roots back in 2,000 B.C. to the contemporary circus. 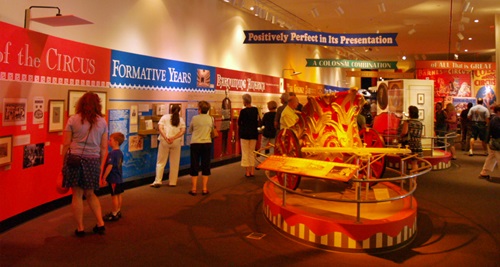 Known as “The World’s Greatest Showman, The Prince of Humbugs, The Shakespeare of Advertising,” there is also great tribute paid to P.T. Barnum along the way.

And, along the historic timeline you will also be treated to the history of the Wild West Shows which were prevalent in the U.S., along with circuses, between 1883 and 1938. 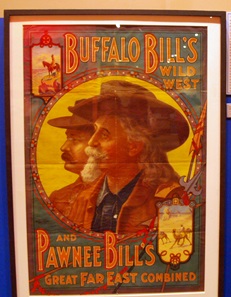 Special homage is paid to Buffalo Bill’s Wild West Show with dime novels, posters and pictures from those days. These are truly wonderful displays.

Around every corner and into every display room you enter at The Ringling Circus Museum you will be amazed by something new; a recollection of history, a circus song playing over the speaker, an artifact, a costume display.

But the icing on the cake, the one display you must see is on the first floor of the first building.

It’s the 3,800 square foot Circus Miniature and it's the world’s largest, painstakingly built by hand. 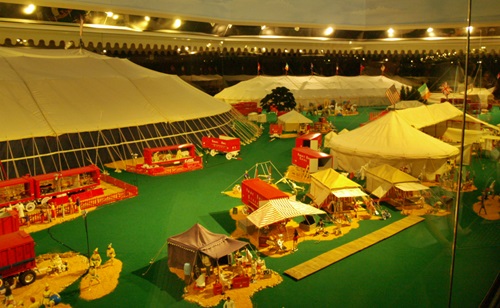 With eight circus tents and 42,000 circus related objects on display, it replicates the historic circuses of the period from 1919 – 1938, the days of the Big Top (which ended with the death of John Ringling in 1936 and his successor, John Ringling North, who moved the circus to indoor arenas and amphitheaters). 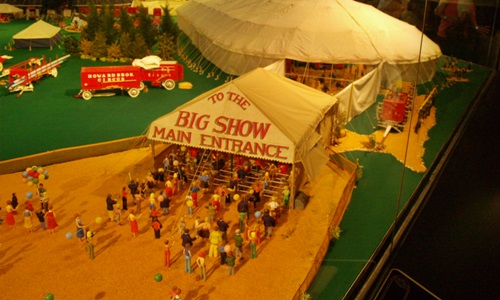 The Circus Miniature, built by Ringling Museum benefactor, philanthropist and circus historian Howard Tibbals, depicts life around the fictional Howard Brothers Circus, complete with circus trains and train yards and other models that depict that era, all in a ¾ inch-to-the-foot scale recreation of circus life outside of and under the Big Top.

There’s so much to see in this Circus Miniature that you could easily spend all your time here in amazement and wonder at this truly brilliant recreation of circus life in “the olden days” that Howard Tibbals has handcrafted. You can even see his workshop elsewhere in the Ringling Circus Museum. 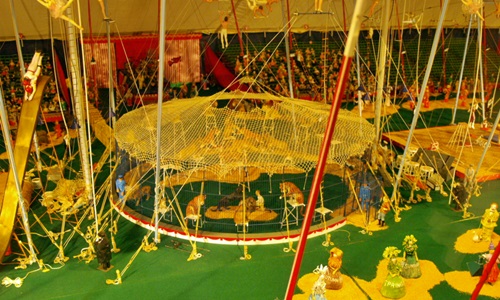 After you wind your way through the amazing circus history on the first and second floors of the first building of the Ringling Circus Museum you’ll work your way to building two where you’ll find more artifacts on display.

From the acrobats and aerialists to the ringmasters, animal trainers and big cat tamers like Gunther Gabel-Williams, you’ll find all the performers honored there.

Plus you’ll see the history of high wire walkers with a special tribute to Karl Wallenda.(Sarasota is home to current day high wire walker and Karl Wallenda descendent, Nik Wallenda, who tight-rope-walked over Niagara Falls in 2012 and is scheduled to high-wire-walk across the Grand Canyon in June, 2013).

In addition you’ll find displays about the death defying dare devils and a tribute to the human cannon balls as well as the astounding animal acts along with costumes and much, much more.

There are great recollections, photos and tributes to the great clowns over the years, too, including Emmet Kelly and Lou Jacobs.

There’s even Lou Jacobs’s tiny, working clown car into which the 6 foot contortionist folded and stuffed his body, drove the car around and climbed out of. 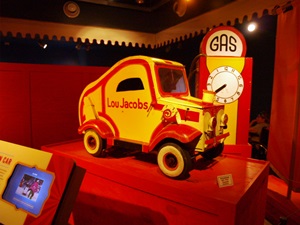 One room of the museum pays tribute to the 1952 Cecil B. DeMille Academy Award Winning Film for Best Picture, “The Greatest Show on Earth,” a movie that depicts life around and under the Big Top. 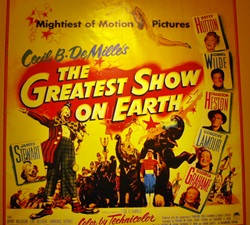 About half of the film was shot in Sarasota, during tourist season of 1951, at the Ringling Brothers winter quarters, which in those days was just northeast of Fruitville and Beneva Roads in Sarasota.

The film would go on to premiere the next winter at the old Florida Theater which is now the Sarasota Opera House on Pineapple Avenue.

As you move along through your tour of the second building of The Ringling Circus Museum you will eventually step into a huge room that houses not only circus band wagons and the human cannon ball truck but animal wagons and other large circus pieces and artifacts as well.

And not to be missed, and trust me, you won't; your eyes will fix upon The "Wisconsin" Railroad Car which was John and Mable Ringling’s private car.

It was named "Wisconsin" in honor of the Ringling's home town of Baraboo, Wisconsin.

The railroad car was built by the Pullman Company in 1905 and was a luxurious form of travel for John and Mable Ringling who used it both for business and pleasure.

The car weighs in at 65 tons and is 79 feet long, 10 feet wide and 14 feet tall. And it’s an impressive and well kept piece of history. 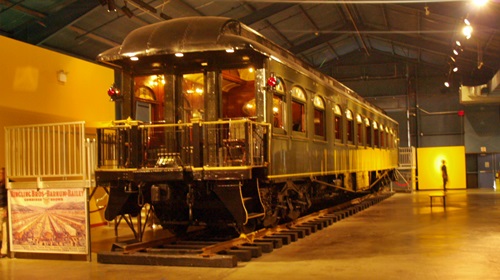 You can’t enter the car but you can easily see inside from the platform next to the car since the windows have been removed for easy viewing. 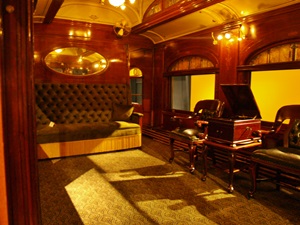 Inside the train car there are a couple of staterooms, a dining room, private bathroom, an observation platform, servant quarters and more.

It’s quite impressive for traveling back in those days.

While at the Ringling Circus Museum you’ll also discover the unique and special relationship that the Sarasota and Venice, Florida areas hold in connection with John Ringling and the Ringling Brothers Circus. 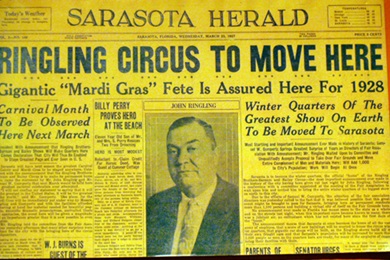 There are many more things to see and experience at the Ringling Circus Museum that I haven’t touched on here because I want to leave some surprises for you to discover on your own.

I will say this, though: you can easily spend more than four hours here if you become absorbed in the history that the Ringling Circus Museum presents. 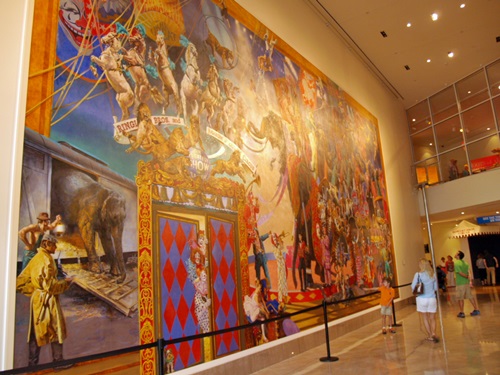 It’s an amazing way to spend a day, so as I have advised elsewhere in my site: if you really want to see the museum at your own pace, don’t bring anyone along who is likely to push you at a faster pace than you’re comfortable with. It’s better to go alone.

And if you don’t see it all in day one, if you have additional leisure time in the Sarasota area, you can always go back for a second day.

You will also find on the 66 acre Ringling Museum Estate Grounds that are home to the Ringling Circus Museum: 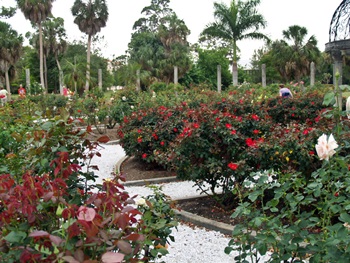 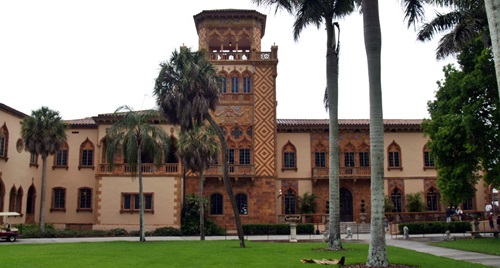 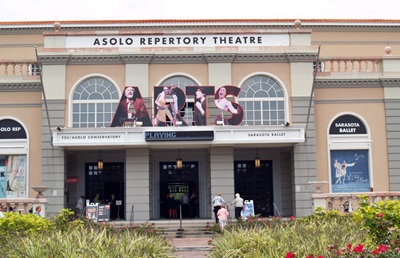 and three places to grab a bite to eat:

For more about Sarasota's unique history with the circus, see this related page about St Armand's Circle's "Ring of Fame."

Tips: For your special needs and convenience there are also complimentary tram stops along the pathways throughout the Ringling Estate and wheelchairs are available at The Ringling Circus Museum.

Directions: From downtown Sarasota drive north on U.S. Rt. 41 (Tamiami Trail) to University Parkway. Turn left into the museum grounds and on to Bay Shore Road