Annual Induction Ceremony: January 10, 2021
Canceled due to COVID-19. They are trying to reschedule for mid-March 2021.

Pre-Ceremony festivities will feature the Windjammers, a 60 piece circus band, conducted by band leader Andrew Glover. Not to be missed.

In the park there are usually rows of high-rise bleachers from where spectators can enjoy all of the ceremonies under open skies.

2017's inductees: Acrobat Reggie Armor, considered the most gracious and elegant flyer ever. Dora Foster "Rogana,' from Europe, both an acrobat and dare-devil, she joined the RBBB CIrcus in 1969. Henry Ringling North, co-owner of the RBBB show from 1936-1967 and credited with naming one of Ringling’s biggest attractions, Gargantua. The Pedrolas, a troupe with high and low wire acts, aerial cradle, slide for life, contortionist and musical clowns, appearing in Europe before coming to America in 1958. Allen Bloom, Senior Vice President for Ringling and Feld Entertainment from 1967 on. Starless Night, High School horse Starless Night is seen in the parade in the movie “The Greatest Show on Earth.”

2015's inductees: Del Moral Troupe for perch-pole balancing, Circus historian and author Fred D. Pfening, Jr., Trapeze Flyer Miguel Vazquez,  Jacqueline Zerbini for her trapeze artistry and her training of tigers and lions; and H.S.H. Prince Rainier of Monaco for his creation of the Circus Festival of Monte Carlo.

2012's inductees were: Cecil B. DeMille Oscar Winning Director of “The Greatest Show on Earth,” parts of which were filmed in Sarasota and Barry Lubin, known as the clown “Grandma,” who is also in the International Clown Hall of Fame.

The St Armands Circle Ring of Fame around the Central Park was first started in 1987 as a way to honor world famous circus performers and the rich circus heritage of the Sarasota area. It's a "Ring of Fame;" as in Three "Ring" Circus! 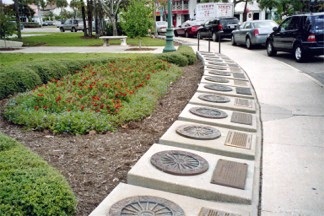 The St Armands Circle Ring of Fame honors circus greats with their own bronze plaques along the palm-tree circled park’s outer edge. Over 80 circus greats from all over the world are remembered here.

Stroll around the outer edge of St Armand's Circle Park and see if you recognize or remember any of the names of these circus greats who have been inducted into the Ring of Fame: 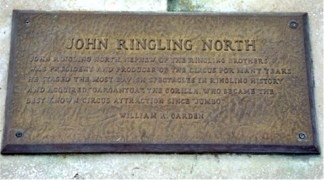 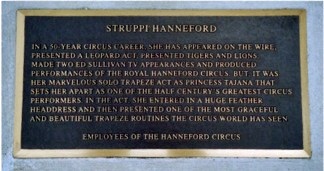 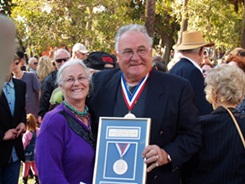 Usually conducted under sunny Sarasota skies, the induction Ceremony for the St Armands Circle Ring of Fame is filled with well wishers on the grounds and in the stands to watch and listen to some legendary circus stars.

During one of the ceremonies, inductee, the legendary "Tarzan" Zerbini (pictured above) poses with his award and a well wisher from the crowd.

Zerbini, an animal trainer as well as a performer and circus owner, told the story of how during a performance he had his head in the mouth of a lion when a large, near by balloon popped and startled the animal! Zerbini said he was "fortunate" to be with us for the ceremonies this day. 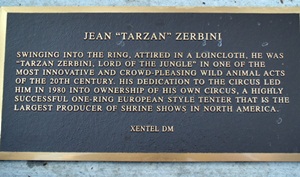 Why Commemorate the Circus? Why a "Ring of Fame" and not a "Hall of Fame," you ask? Why is there a St Armands "Circle?"

Here are the answers to those questions:

Because circus great John Ringling purchased St Armands Key in 1917 for his development ideas, which included residential lots and a shopping center laid out in a circle, after the famed “Three RING Circus!” 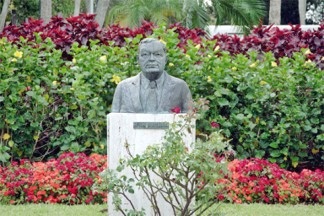 In 1925, Ringling commissioned the work to begin on a causeway to join St Armands Key to the downtown Sarasota area.

In fact, the Ringling Brothers’ Circus elephants were used to haul the huge log-timbers from which the bridge and causeway would be built.

A year later, amid great pomp, ceremony, showmanship and probably more than just a little hype - (Ringling was, after all, a great Circus promoter) - both the John Ringling Causeway and the Ringling Estates development opened for business on St Armands Key.

With circus great John Ringling, himself, leading a parade across the causeway and with his Circus Band playing from a bandstand in the center of St. Armands Circle, it must have been quite the sight! Can’t you just hear the music and picture the hoopla? 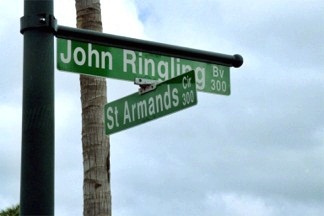 When the depression arose in the U.S. in the early 20th Century John Ringling could no longer afford to maintain St Armands, so he gifted it to the City of Sarasota!

How’s all that for a colorful start to the 20th Century history of St Armands Key and the Sarasota area? 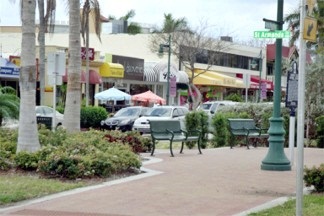 One last circus note of Sarasota significance: Actual scenes of the 1952 Academy Award Winning motion picture with Charlton Heston, “The Greatest Show on Earth,” were filmed in Sarasota, Florida, the winter home of the Ringling Brothers, Barnum & Bailey Circus in those days.

And, the rights for the film makers to the use of the movie title and circus’s motto, “The Greatest Show on Earth,” and of Ringling Brothers, Barnum & Bailey's facilities and performances, were purchased for $250,000. A lot of money in those days!

So now, after reading all of that, you should have a fairly good idea of why we celebrate Sarasota's Circus History and why we have a St Armands Circle Ring of Fame!

And if you're old enough to have grown up during a time when kids ran away to join the circus, and if you ever had those kinds of dreams yourself, you should definitely take a walk around the Ring of Fame.

Maybe it'll bring out the kid in you!

Mmmm, I can smell the popcorn and cotton candy...

Directions: From Sarasota, take Rt. 41 through the Bay front/downtown area of Sarasota over the John Ringling Bridge (southwest) and on to St. Armand's Key and "The Circle."

From St Armands Circle Ring of Fame to Sarasota Attractions