A Real Crowd Pleaser for Young and Old...

First begun in 1986, The Annual Sarasota Holiday Boat Parade of Lights brings out thousands of spectators who line the shores of Sarasota Bay from Centennial Park to Bayfront Park every year.

Viewers come marching armed with their folding chairs. Some even arrive a little earlier and bring a cooler with some snacks and drinks with which to enjoy the festiveness of the Sarasota Holiday Boat Parade.

Usually warm temperatures accompany the Christmas Boat Parade of Lights on Sarasota Bay. (The rain date for this event is Sunday.)

The Parade Route: Starting from City Island, cruising across Sarasota Bay to Centennial Park and then south under the Ringling Bridge and across Sarasota's Bayfront park, about 25 spectacularly decorated and lighted boats make their way to delight and help brighten the holiday mood of those on shore.

There are small boats, medium boats and yachts among the participants in this Armada of brightly lighted and creatively decorated crafts. 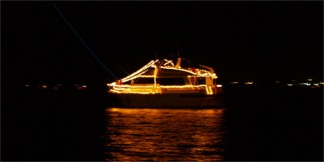 More on the Sarasota Holiday
Boat Parade of Lights

With holiday music playing from on board sound systems to even live music performances on some boats, it’s a fun and festive time along the waterway. You may even see a few of Santa's elves dancing aboard to some festive music.

The best places from which to watch the Sarasota Christmas Boat Parade of Lights are: Bayfront Park (The Bayfront Park spectator viewing area has been expanded to reach a portion of the northern tip of the island, near the fountain.), Centennial Park and City Island. (To get to City Island from downtown Sarasota you have to cross the Ringling Bridge, cut across St. Armand’s Circle, following Rt. 789 and then turn northeast on to Ken Thompson Parkway before the bridge to Longboat Key and then head out to City Island.) 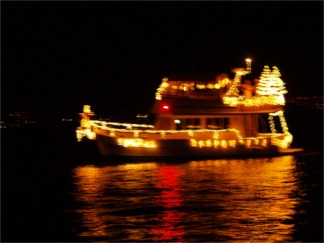 Personally, my favorite spot to watch the Sarasota Christmas Boat Parade of Lights from is Centennial Park.

It's just north of the downtown Sarasota area, on the west side of Tamiami Trail (Rt. 41), just next door to the Van Wezel Auditorium (the purple-colored building or as it's affectionately called, the "purple cow!").

It’s just less congested and much roomier there plus there’s much more free parking at Centennial Park than along Bayfront Park or on nearby downtown Sarasota streets. 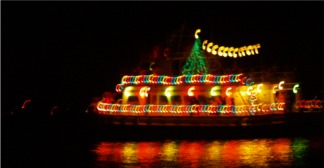 The Sarasota Boat Parade of Lights begins about 6 p.m. and lasts about an hour. 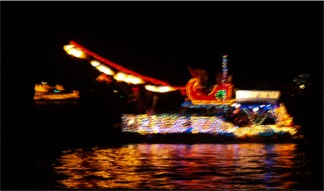 With sparkling bright lights and Christmas and holiday decorated boats, it will be just enough to help put you in the spirit of the season. (Rain Date: Sunday) 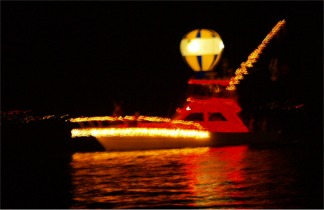 Tips to help you enjoy the Sarasota Holiday Boat Parade of Lights: Arrive about an hour early. Bring lawn chairs. You may even want to bring a picnic cooler along with sandwiches and drinks for a nice Sarasota bay side picnic while you’re awaiting the start of the Christmas Boat Parade of Lights. Don’t forget a camera, too, to capture some holiday memories!

Have a wonderful time!