The theme of the Parade changes yearly, which gives it an updated and fresh appeal each holiday season. 2016's parade theme was "Salute to Veterans."

The theme for 2015's festivities was "All I Want For Christmas."

The best float that keeps with the theme of the Sarasota Holiday Parade will win first prize: The Mayor's Trophy.

Traditionally held on the first Saturday of December at 7 p.m, Sarasota’s Holiday Parade started in 1995 and has become one of the largest and best known Christmas and holiday parades along the Sun Coast. 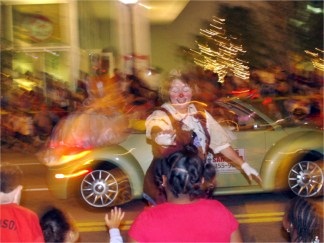 While the parade, which attracts some 25,000 observers, fills the downtown Sarasota air with the sights, sounds and magic of the holiday season for those in attendance, whether young or old, you'll take the spirit of the Sarasota Holiday Parade along with you when you leave.

It's a heart-warming experience to see the twinkle in the eyes of those who are young and young at heart.

Downtown Sarasota’s Main Street is blocked off to traffic and lined with viewers watching the parade under the city street lights with usually warm temperatures (mid 70s), warm hearts and “eyes all aglow!” 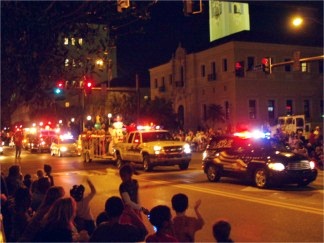 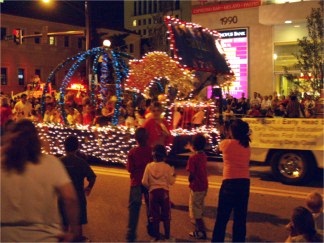 Among the thousands of participants and brightly decorated floats are several live marching bands, usually including the Riverview High School Kilties Band, playing songs of the season. There are usually drill teams, color guards and circus wagons.

There are also parade entries from school and community organizations as well as area businesses all helping to add a little more ho-ho-ho to the holiday season.

Attend the Sarasota Holiday Parade just once and you'll find out why it's one of the most popular annual "must-dos" on my Sarasota Events Calendar. 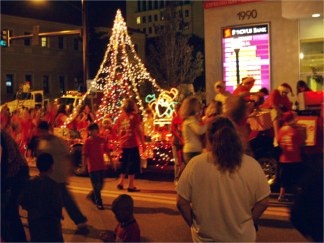 One of the nicer floats was a rolling Santa’s workshop from which toys in the workshop are donated to needy children of the area. 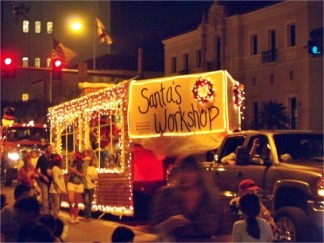 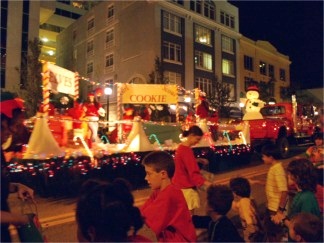 The groups represented in the parade range from 4-H Clubs to Cattleman’s groups, to the Shriners, antique car collecting clubs, High School Marching Bands, drill teams, Honor Guards, various children's groups and many others all getting into the spirit of the season. You may even see a couple circus wagons along the route.

Some of the groups that participate or that have participated through the years include the Circus Arts Conservatory, Make A Wish Foundation, Suncoast Community Church, Stage Door Studio and many, many others. 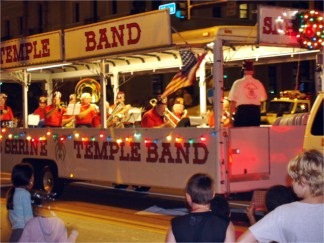 And, of course, the guest of honor, Santa Claus, "rounds" out the parade and its annual finale along with an appearance by Mrs. Claus, too, riding though the downtown streets of Sarasota. 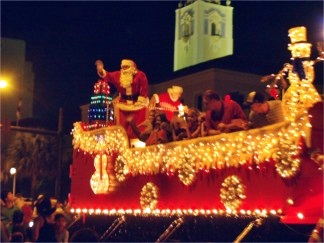 Where: The Sarasota Downtown Holiday Parade route traditionally runs west along Main Street from Washington Boulevard and then heads out to Gulfstream Avenue. The parade lasts about two hours.

The streets on the parade route are blocked off to normal traffic a couple of hours in advance. 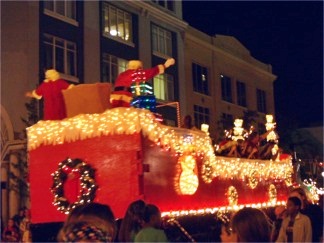 Parade viewers are welcome to bring blankets to toss over the curbside to sit on and lawn chairs as well.

Parking is available downtown on streets and in lots other than those closed for the parade route.

It’s best to arrive about an hour early to find parking and a nice spot along the parade route from which to view the festivities.

Despite large crowds there are usually lots of places on the parade route that are less crowded and from where you can get a better view. You may just have to get there earlier and walk a little further to find them.

Join the parade! Email for more info at; dannybilyeu@gmail.com or call 941-685-0628. Entry deadline is usually around the 1st of November, so don't be late! 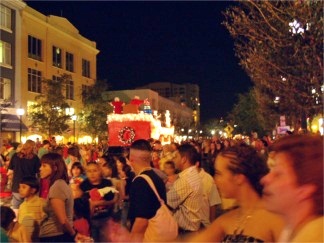 Peace and Love, Happy Holidays to you from
Escape-to-Sarasota.com!

(Happy Holidays and Merry Christmas to you no matter what time of year you're reading this. After all, all of us could use a little more holiday spirit throughout the year! Best holiday wishes to you and your family and loved ones.)

Back to December Sarasota Events