Get your hands on some sharks teeth
without getting into the water!

The Venice Sharks Tooth Festival brings out fossil collectors from all over.

Venice, Florida has long been known as the Sharks tooth capital of the world because of the millions of white and black sharks teeth fossils that wash up on Venice Beach in Florida as well as other near by area beaches.

And it's the return, after 3 years, of the wildly popular festival. The last festival held was in 2019 prior to the COVID pandemic and shut down in subsequent years.

The Venice Sharks Tooth Festival has always been one of the most looked forward to events and one of the most well attended events of the year on my Escape to Sarasota Calendar of events. Originally held as an August event  years ago, the festival moved to the springtime over the years.

The weather along the Sun Coast is usually perfect for outdoor festivals, such as this one, at this time of year. Skies are usually sunny with temperatures in the 70's to low 80's. 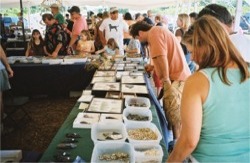 There’s food, fossils, arts and crafts, entertainment and children’s activities. It’s a fun and free event to attend with free parking around the downtown Venice area. In previous years no pets were allowed.

Here's a short video of the Festival for you:
(Speakers on!)

There’s plenty to see and purchase in the way of Shark’s teeth, for the serious fossil collector. The shark’s teeth displays are under large tents to help you stay cool and to help get you a close up view of the many shark’s teeth and other marine-life-style fossil and wares for sale.

I had no idea that Sharks tooth collecting was such a serious hobby.

While the shark’s teeth are the big draw to this event, there are other exhibitors of arts and crafts, some of which you might also want to purchase and take home.

There are over 100 artist’s displays around the festival grounds.

There are some very talented artisans and craftsmen and women displaying their wares at this festival.

By walking and browsing through the special displays of arts and crafts, aisle by aisle, you can easily fill up an afternoon or early evening and see some very creative home made goods.


The Festival is much like a Carnival atmosphere and there are plenty of food vendors up and down the festival’s main path (an old runway, now turned into the Food Court!), so if you get hungry all you have to do is step into line.

The food court features everything from burgers and Italian sausage sandwiches to a variety of sea food, ribs and other food that smells so good in the open air, it will defy you to try to get through the afternoon or evening without stopping to eat.

The festival also features a children’s playground area near the  splash fountain and fun and games for the kids as well as hands on exhibits from Sarasota’s famed Mote Aquarium.

Check out the area of the Venice Gazebo in Centennial Park for educational activities aimed at kids like fossil digs sponsored by both Mote Marine Aquarium and the Florida Public Archaeology Network.

There’s also an entertainment and musical lineup of live bands on Saturday and Sunday. Dance the day away to a mix of local and regional bands playing everything from beachy rock to jazz. The concert stage will be just south of the splash fountain kids' zone. 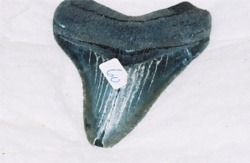 Directions to the Sharks Tooth Festival in Venice, Florida: From Sarasota take Rt. 41 south to the Rt. 41 Venice bypass; look for the signs on Rt. 41 along the Venice Bypass directing you to the Venice Municipal Airport festival grounds.