They are now called The 2021 P1 Offshore and AquaX Championships

Smoke on the Water…This event is not only about offshore power boat racing, but is also a festival with more than a week’s worth of activities.

A few of the more popular events of the Suncoast Summer festival:

The Need for speed…The real stars of the Suncoast Race, of course, are the offshore racing boats, some of which reach speeds of over 100 mph on the straight-aways of this six and a half mile long race course off Lido Key Beach.

This Offshore Boat Racing Spectacle is absolutely free to attend and open to the public...you won't find any ticket sellers and ticket takers here! 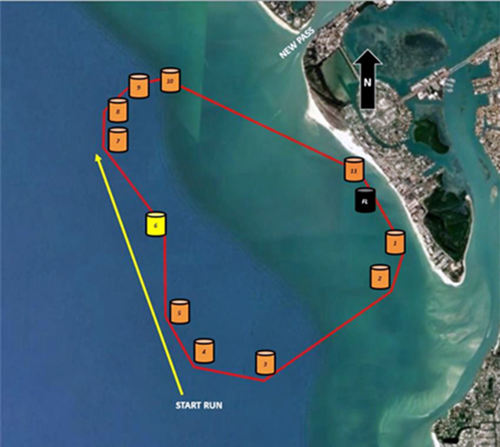 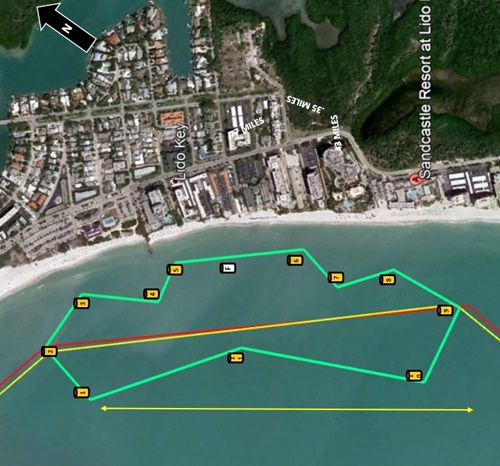 There has even been a "Miss Super Boat Grand Prix” Bikini Contest as part of the Grand Prix Fan Fest in the past. The contest has been an "on again, off again" event with the festival and may return in the future. We keep the page on line as a tribute to the past with hopes that it returns in the future.

The Sarasota Boat Races and Suncoast Summer Festival is one of the biggest and most high profile annual occasions on my Sarasota Events Calendar.

Feel the Power...And while offshore boat racing is underway it seems there is another race going on overhead, as numerous helicopters swoop over the offshore racing boats, keeping a watchful eye out for marine animals, as well as an eye on the boats and drivers, with emergency divers and medical staff aboard the copters for quick medical response in case of a mishap on the water. 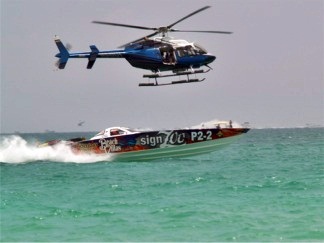 A view to a thrill…The best place to view the sites of the Sarasota Boat Races, The Suncoast Offshore Racing Grand Prix, is from Lido Key Beach, as the race course runs from New Pass (north of Lido Key/south of Longboat Key) to Big Pass (south of Lido Key/north of Siesta Key). Lined up along Lido Public Beach, you’ll be able to see every bit of offshore power boat racing at it’s finest. 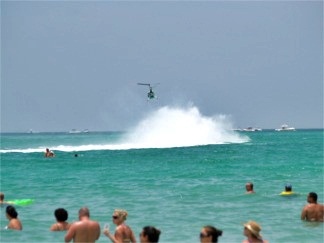 Hear the Roar...Offshore power boat racing is an awesome spectacle to witness and the Sarasota Boat Races can attract crowds numbering 50,000 along Lido Beach. While crowds may be large (as well as enthusiastically estimated!) it is spread out, friendly and quite comfortable, especially in the 90-plus degree heat. And with the water right in front of you, many spectators choose to kill two birds with one stone by staying cool in the water while watching the offshore races from…offshore! 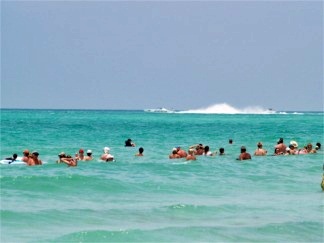 It’s a festive atmosphere up and down Lido Beach from as early as 5 a.m. - 6 a.m. when the most die-hard of the fans arrive early for good parking spots and to stake out their position on the beach for what they think will be the best vantage point to see the offshore racing boats.

But, despite the crowds, there are plenty of places on the beach or in the water from which to get a great view of the race.


The beach is filled with brightly colored umbrellas and picnic shades, along with offshore boat racing fans that bring grills that fill the beach side with the aromas of hamburgers, hot dogs and other barbecue grilled treats.

Here's a short video of the Sarasota Boat Races:

It all resembles a giant tailgate style party with friendly fans, food, fun and the fastest offshore racing boats on water! 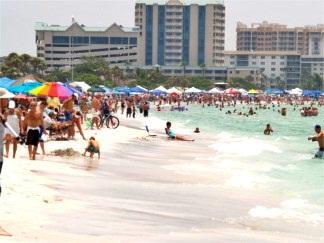 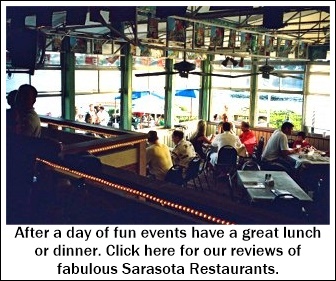 Tips: While parking along Ben Franklin Drive (the beach side street) and at the Lido Beach Public parking lot fills up early and fast, there is still plenty of parking at the free lots around St. Armand’s circle. And it's a close enough walk to the Sarasota Boat Races on Lido Key Beach. If you do park at one of St. Armand’s free parking lots, be prepared for a walk to the beach, and at the end of June/early July it can be a really hot walk, although it’s only a few blocks.

Alternate Idea: (The first year I attended the Sarasota Boat Races a friend and I put our two bikes on a bike carrier on his SUV, parked on the other side of St. Armand's Circle and bicycled to the beach. But we traveled lightly, without coolers and conveniences! Although one could always ride with a backpack on or carry a small portable cooler along.)


More Tips: Bring a cooler (on wheels, if you’ll be walking a few blocks) with food and drinks, a sun umbrella and beach chairs, lots of sunscreen and a hat to protect your head and face from the sun’s direct rays and a camera and/or binoculars so you can get an even better view of the Suncoast offshore racers. Clothing: Wear light-weight, loose-fitting, light-colored clothes or a swimsuit and t-shirt.

Remember: this is Florida in late June and early July. It’s sunny. It’s hot. I’ve seen reports of peoples’ hair catching on fire, although I’ve been unable to personally confirm those reports! Take appropriate precautions for you and your family as far as the heat and sun go.

By the way, over the years, proceeds from the Sarasota Boat Races Offshore Racing Grand Prix Festival have provided over $20 million dollars for the construction of facilities serving physically and mentally challenged individuals. That’s a good thing! More on the Sarasota P1 Offshore and AquaX Championships and the Suncoast Summer Fest. 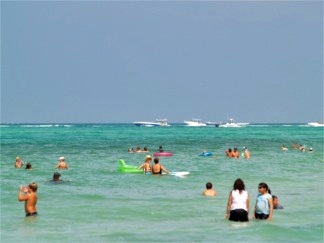 Directions: To get to Lido Key Beach from Sarasota take Rt. 41 through the bay front/downtown area to the John Ringling Bridge. Go over the bridge (southwest) to St. Armand’s Circle and bear to the left around the Circle (west) toward Lido Key Beach. Turn left (south) on to Ben Franklin Drive and look for parking spots on the street or at the Lido Key Beach public parking lot, south on Ben Franklin Drive. If no parking is available, double back to St. Armand’s Key and look for free parking lots around the rear of the shops on St Armand’s Circle (look for the free parking signs around the Circle).